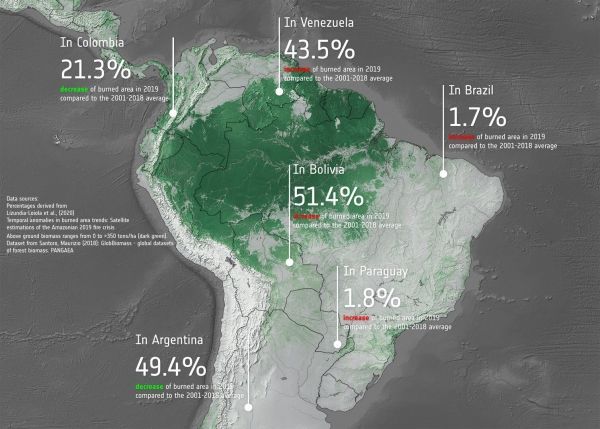 Data indicates only a small increase of Amazonian fires in 2019 compared to 2018.

Thousands of fires broke out in the Amazon last year – sparking an international media frenzy. A detailed analysis, using data from the European Space Agency’s Climate Change Initiative, indicates that while there was a small increase of fires in 2019 compared to 2018, fires in Brazil were similar to the average annual number of fires detected over the past 18 years.

While forest fires are common in the Amazon, they vary considerably from year-to-year driven by changes in climate, as well as variations in deforestation and forest degradation.

Attention on fires last year sparked an international demand for up-to-date information on active fires – particularly in Brazil. However, these numbers were never compared to the number of fires over a longer period of time.

Detailed in a recent paper published in Remote Sensing, scientists using data from ESA’s Fire CCI project, analysed burned areas in South America in both 2018 and 2019 – and compared the data to the 2001-18 yearly average.

According to the report, the total burned area in South America was around 70% more in 2019 compared to the same period of 2018, however only slightly more than the yearly average over the past 17 years.