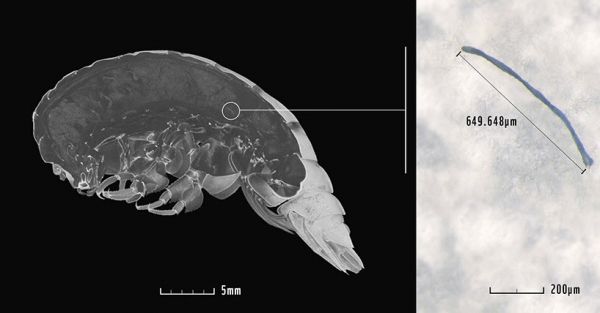 Newcastle University research has uncovered the presence of plastic in a new species of deep-sea amphipods which has been discovered in one of the deepest places on earth.

The amphipod - known in informal speech as a “hopper” - was discovered by researchers from Newcastle University in the Pacific Ocean’s Mariana Trench between Japan and the Philippines.

The researchers officially named the species Eurythenes plasticus in reference to the plastic it has ingested. In its body was polyethylene terephthalate (PET), a substance found in a variety of commonly used household items such as water bottles and workout clothes. The research was supported by WWF and published in the renowned scientific journal Zootaxa today (5 March).

Dr Alan Jamieson, Senior Lecturer in Marine Ecology at Newcastle University and head of the research mission, said: “We decided on the name Eurythenes plasticus as we wanted to highlight the fact that we need to take immediate action to stop the deluge of plastic waste into our oceans.”