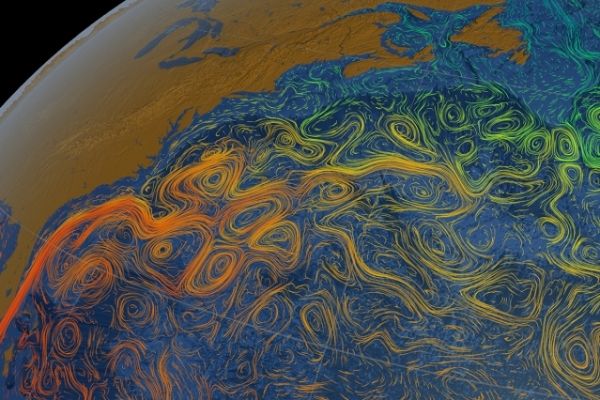 Imagine a massive mug of cold, dense cream with hot coffee poured on top. Now place it on a rotating table. Over time, the fluids will slowly mix into each other, and heat from the coffee will eventually reach the bottom of the mug. But as most of us impatient coffee drinkers know, stirring the layers together is a more efficient way to distribute the heat and enjoy a beverage that’s not scalding hot or ice cold. The key is the swirls, or vortices, that formed in the turbulent liquid.

“If you just waited to see whether molecular diffusion did it, it would take forever and you'll never get your coffee and milk together,” says Raffaele Ferrari, Cecil and Ida Green Professor of Oceanography in MIT’s Department of Earth, Atmospheric and Planetary Sciences (EAPS).

This analogy helps explain a new theory on the intricacies the climate system on Earth — and other rotating planets with atmospheres and/or oceans — outlined in a recent PNAS paper by Ferrari and Basile Gallet, an EAPS visiting researcher from Service de Physique de l'Etat Condensé, CEA Saclay, France.

It may seem intuitive that Earth’s sun-baked equator is hot while the relatively sun-deprived poles are cold, with a gradient of temperatures in between. However, the actual span of that temperature gradient is relatively small compared to what it might otherwise be because of the way the Earth system physically transports heat around the globe to cooler regions, moderating the extremes.