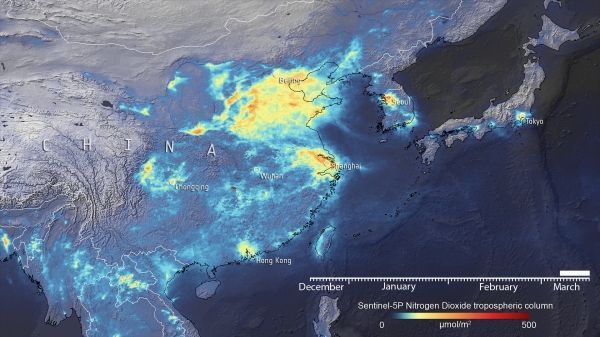 Recent data have shown a decline of air pollution over northern Italy coinciding with its nationwide lockdown to prevent the spread of the coronavirus (COVID-19).

This new map shows the variation of nitrogen dioxide concentrations over China from December to March – thanks to the Tropomi instrument on board the Copernicus Sentinel-5P satellite.

As news of the coronavirus broke out in the Hubei province, China, in late December 2019, stricter measures were put in place. As a result, by late January, factories were closed and streets were cleared as Chinese authorities had ceased daily activities to stop the spread of the illness.

The Copernicus Atmosphere Monitoring Service (CAMS) observed a decrease of fine particulate matter – one of the most important air pollutants – in February 2020 compared to the previous three years. By combining satellite observations with detailed computer models of the atmosphere, their studies indicated a reduction of around 20-30% in surface particulate matter over large parts of China.