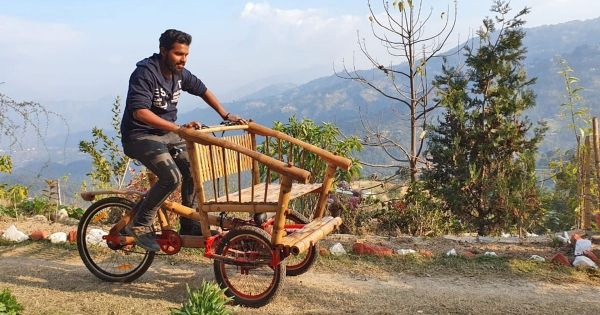 Where there’s a will, there’s a way. The truth of that saying was revealed once again to Lance Rake when he traveled to Kathmandu, Nepal, last year to develop a delivery version of the bamboo bicycles for which he is known.

Without what he called proper tools or even flat surfaces on which to work, the University of Kansas professor of industrial design and his partners at Nepal’s Abari Foundation developed a working prototype of an electric-assisted, bamboo-bodied tricycle whose use holds the promise of reducing pollution in the historic city center.

Last spring, Rake won a Fulbright Global Scholar Award for his proposal to spend six months in Australia and Nepal, working on the prototype that blends the latest technology with natural materials.

He spent the first three months visiting the Royal Melbourne Institute of Technology in Australia, working with experts in electric motors. His research helped him choose the small electric motor contained in the hub of the rear wheel of the cargo bike, which has been nicknamed the "habre" after the Nepalese word for red panda, a bamboo-munching mammal native to the region.

Continue reading at University of Kansas

Image via University of Kansas