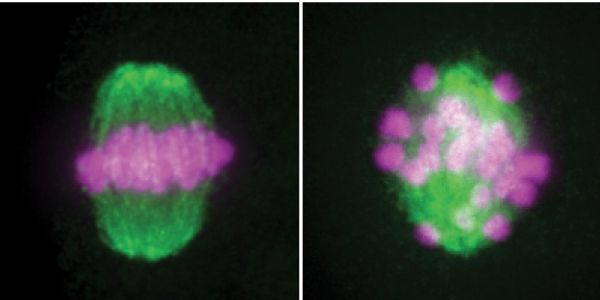 While some of our body’s cells divide in a matter of hours, the process of making sperm, meiosis, alone takes about 14 days from start to finish.

While some of our body’s cells divide in a matter of hours, the process of making sperm, meiosis, alone takes about 14 days from start to finish. And fully six of those days are spent in the stage known as the pachytene, when pairs of chromosomes from an individual’s mother and father align and connect.

“This stage is really important, because the pair needs to be aligned for the exchange of genetic material between those two chromosomes,” says P. Jeremy Wang, a biologist in Penn’s School of Veterinary Medicine. “If anything goes wrong at this stage, it can cause a defect in meiosis and problems in the resulting sperm, leading to infertility, pregnancy loss, or birth defects.”

In a new paper in Science Advances, Wang and colleagues have identified an enzyme that plays a crucial role in maintaining this chromosomal pairing during the pachytene stage of meiosis. Without this protein, named SKP1, meiosis cannot proceed to metaphase, the next major developmental stage involved in generating sperm cells.

Read more at University Of Pennsylvania

Image: The activity of the Skp1 protein is crucial for sperm formation, Penn Vet scientists found. In a dividing sperm precursor cell, chromosomes (in purple) normally align in the middle, as shown on the left. But in cells lacking Skp1, as shown on the right, chromosomes fail to align and are instead distributed chaotically around the cell. (Image: Courtesy of the Wang laboratory)