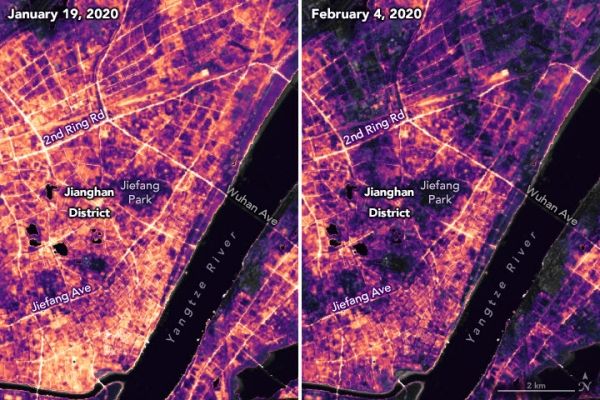 Night lights not only speak to where we live, but how.

Beyond their beauty, images of Earth at night have a practical use. The nighttime lights of cities, highways, and other infrastructure are fingerprints of how civilization has spread across the planet. For some researchers, those lights not only speak to where we live, but how.

A team of scientists from NASA’s Goddard Space Flight Center (GSFC) and Universities Space Research Association (USRA) has detected signs of the recent shutdown of business and transportation around Hubei province in central China. As reported by the U.S. State Department, Chinese authorities suspended air, road, and rail travel in the area and placed restrictions on other activities in late January 2020 in response to the COVID-19 outbreak in the region.

A research team has been analyzing images of Earth at night to decipher patterns of energy use, transportation, migration, and other economic and social activities. The images on this page show changes in activity around the city of Wuhan, China, between January 19 and February 4, 2020. Labels marked with “G” or “S” indicate highways where there appeared to be a pronounced change.