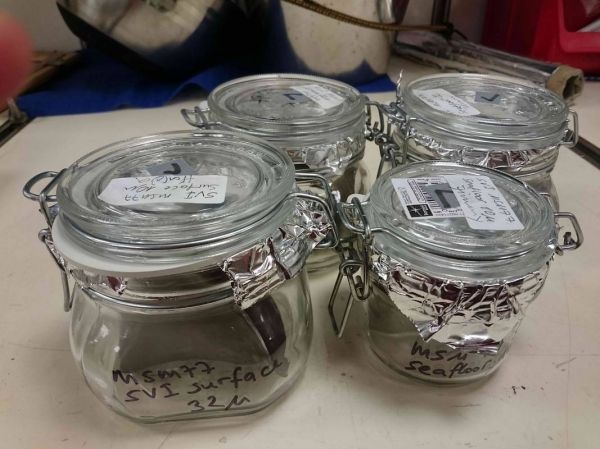 Working in the Arctic Fram Strait, scientists from the Alfred Wegener Institute, Helmholtz Centre for Polar and Marine Research (AWI) have found microplastic throughout the water column with particularly high concentrations at the ocean floor.

Working in the Arctic Fram Strait, scientists from the Alfred Wegener Institute, Helmholtz Centre for Polar and Marine Research (AWI) have found microplastic throughout the water column with particularly high concentrations at the ocean floor. Using model-based simulations, they have also found an explanation for this high level of pollution. According to their findings, the two main ocean currents in Fram Strait transport the microscopically small plastic particles into the region between Greenland and Spitsbergen from both the Arctic and the North Atlantic. While passing through the Strait, many particles eventually drift to the seafloor, where they accumulate. The experts report on this phenomenon in a study just released in the esteemed journal Environmental Science & Technology.

Located between the northeast coast of Greenland and the Arctic island of Spitsbergen, Fram Strait is the only deep passage between the Arctic and Atlantic Oceans. In its waters, which reach depths of 5,600 metres, two opposing currents flow right by one another like an underwater highway. In the eastern “lane” the West Spitsbergen Current transports warm water north from the Atlantic, while in the other lane the East Greenland Current moves sea ice and frigid water south from the Arctic. This extraordinary combination of circumstances is most likely the reason why experts from the Alfred Wegener Institute, Helmholtz Centre for Polar and Marine Research (AWI), while collecting water and seafloor samples at the Arctic deep-sea observatory HAUSGARTEN in Fram Strait, detected extremely high quantities of microplastic particles in the sediment, and intermediate levels in the water column in the summer of 2016.

“We found the highest concentration of microplastic particles in water at our northernmost sampling spot near the sea-ice edge,” reports AWI biologist and first author Mine Tekman. In the area technically referred to as the marginal ice zone, one cubic metre of surface water contained more than 1,200 microplastic particles, though this hardly came as a surprise to the researchers. “From previous studies we knew that the Arctic sea ice can contain as much as 12,000 microplastic particles per litre of meltwater. When this ice reaches the end of its journey and melts in the northern Fram Strait, it most likely releases its microplastic load into the sea, which would explain the high concentration in the surface waters,” she adds.