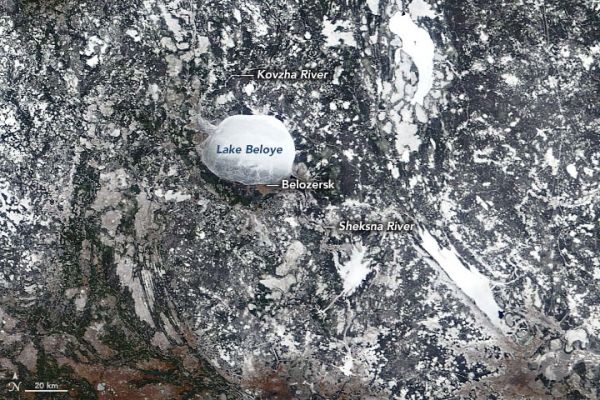 This lake in northwest Russia is small compared to Lake Baikal, yet it still manages to make a stately appearance in satellite imagery.

Russia’s Lake Beloye holds just over 6 cubic kilometers of fresh water; drops in a bucket compared to the 24,000 cubic kilometers in Lake Baikal, the world’s largest freshwater lake by volume). Yet Beloye still manages to make a stately appearance in satellite imagery.

On March 17, 2020, the Moderate Resolution Imaging Spectroradiometer (MODIS) on NASA’s Terra satellite acquired this natural-color image of Lake Beloye in Russia’s Vologda region. It stands out in part because its water is shallowly spread across more than 1,000 square kilometers (400 square miles)—larger than the average lake area in this part of northwest Russia.

It also stands out because of the stark contrast of lake ice—some of it is likely snow-covered—with the surrounding landscape. The lake usually freezes over in early November and breaks up in late April.