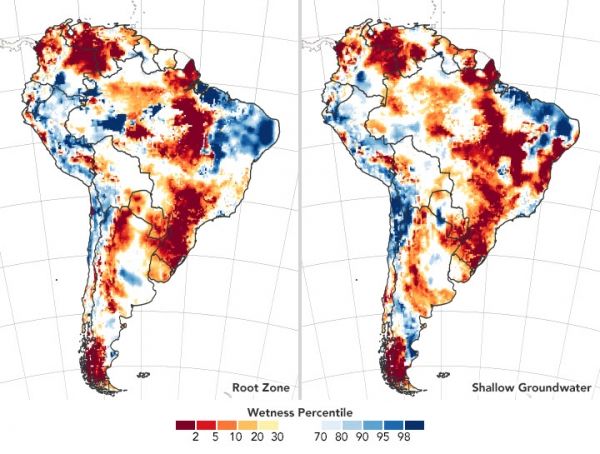 Twin satellites are assessing the state of soil moisture and groundwater on the continent and around the world.

As South America moves into autumn, several parts of the continent are facing rainfall deficits and droughts that might shrink harvests. Twin satellites from NASA and the German Research Center for Geosciences are providing fresh insights into the conditions.

Rainfall in the summer of 2020, and specifically in March, has been as much as one-third below normal in Brazil’s Mato Grosso do Sul, São Paulo and Paraná states, according to several news reports. Likewise, northern Argentina, Chile, Colombia, and Venezuela all reported rainfall deficits and drought conditions in February and March.

The dry weather was matched by excessive heat. According to the U.S. National Centers for Environmental Information, South America had its second warmest December to February period in 110 years of records. On a global scale, February marked the 44th consecutive February and 422nd consecutive month with temperatures higher than the 20th Century average.