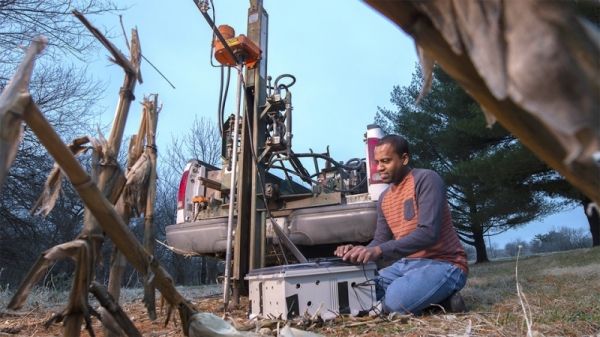 On the surface, it resembles a stainless steel spear, roughly 6 feet long with a silver-dollar diameter that ends in a 30-degree point.

But that point — the entire point of the aptly named penetrometer — is about delving beneath the surface, where it can shine some visible and near-infrared light on the agriculturally and environmentally vital properties of the subsoil lying beneath topsoil.

By characterizing that subsoil on the fly and in the field, University of Nebraska–Lincoln engineers Yufeng Ge and Nuwan Wijewardane believe the prototype could emerge as a time- and cost-saving tool that informs precise irrigation and fertilizer application. And they envision it allowing more farmers to participate in a burgeoning, climate-friendly marketplace that incentivizes farmers to capture carbon in their soils.

That potential stems from a simple principle: All substances, including the organic matter and minerals present in soil, reflect light differently. More to the point, every substance reflects different wavelengths of light, including the visible and near-infrared regions of the electromagnetic spectrum.

Image via University of Nebraska Lincoln