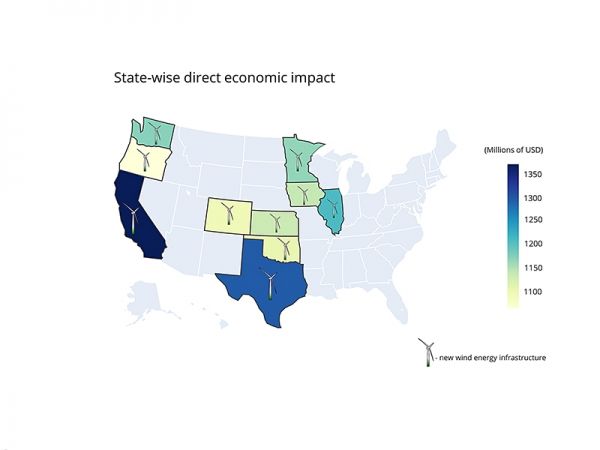 Wind, which generates less greenhouse gas emission than burning fossil fuels, is making up an increasing share of the energy production portfolio in the United States. But wind is not as efficient as coal or natural gas, causing some concern about its economic impact.

A Purdue University study that models increased wind production in 10 states shows significant economic impact in those states, as well as billions of dollars spread over the rest of the country. Led by Shweta Singh, an assistant professor in the Department of Agricultural and Biological Engineering and in Environmental and Ecological Engineering, a stand-alone academic unit in the College of Engineering, with colleagues at the University of Sydney, the results were published in the March issue of the journal Applied Energy.

“While the impacts are directly felt in the state experiencing the increase in economic activities due to installation of new wind energy generation capacity, the positive economic effects also spill over as shown by the MRIO calculations,” the authors wrote.

The analysis considers the effects of adding 500 megawatts each in 10 different states that produce the most wind energy in the U.S. — Texas, Iowa, Oklahoma, California, Kansas, Illinois, Minnesota, Oregon, Washington and Colorado. The result would be almost $24 billion in economic impact in those states, as well as an additional $3 billion throughout the rest of the United States.