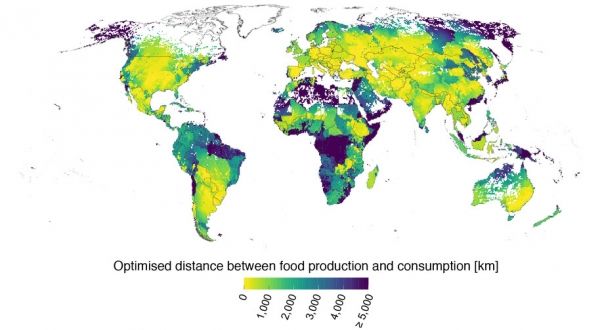 A recent study from Aalto University shows that less than one-third of the world's population could currently meet their demand for food produced in their local vicinity.

Globalisation has revolutionised food production and consumption in recent decades and cultivation has become more efficient, and as a result, many people’s diets have diversified and food availability has increased in various parts of the globe. However, it has also led to a situation where the majority of the world population live in countries that are dependent on, at least partially, imported food. This can intensify vulnerabilities during any kind of global crisis, such as the current COVID-19 pandemic, as global food supply chains are disrupted.

Aalto University dissertation researcher, Pekka Kinnunen, says ‘There are big differences between different areas and the local foliage. For example, in Europe and North America, temperate crops, such as wheat, can be obtained mostly within a radius of 500 kilometres. In comparison, the global average is about 3,800 kilometres’.

The recent study, published in Nature Food and led by Kinnunen, modelled the minimum distance between from crop production to consumption that humans around the world would need to be able to meet their food demand. The study was conducted in collaboration with the University of Columbia, the University of California, the Australian National University and the University of Göttningen. The study factored in six key crop groups for humans: temperate cereals (wheat, barley, rye), rice, corn, tropical grains (millet, sorghum), tropical roots (cassava) and pulses. The researchers modelled globally the distances between production and the consumer for both normal production conditions and scenarios where production chains become more efficient due to reduced food waste and improved farming methods.