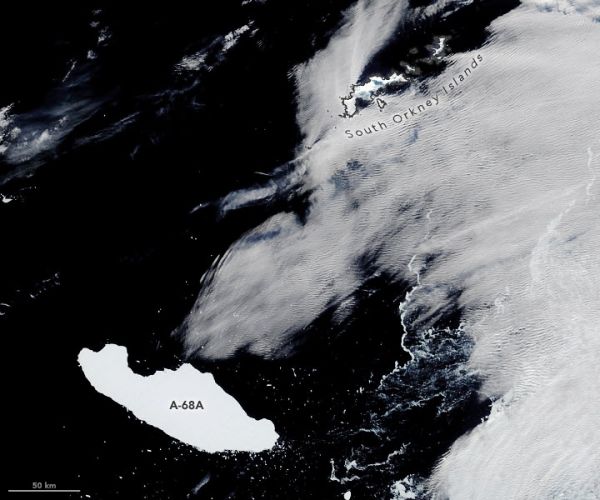 The huge Antarctic iceberg has floated into warmer waters, but it is still mostly intact.

Some Antarctic icebergs can persist for many years. A newborn child could go off to school, learn to drive, and become an adult all within the span of time it takes some of the largest icebergs to break up and melt away. Iceberg A-68A—now just a few months shy of its third birthday—is a youngster compared to some. But the mammoth berg has already had an impressive journey.

In this image, A-68A is about 500 miles from where it broke away from the Larsen C Ice Shelf in July 2017. The journey, however, was not exactly direct. In its first year, the iceberg moved just 45 kilometers (28 miles) as tides shuffled the Delaware-sized block of ice back and forth, occasionally smashing it against a rocky outcrop on the Antarctic Peninsula. The region’s powerful currents eventually won, and the iceberg has since been winding its way north through the Southern Ocean.