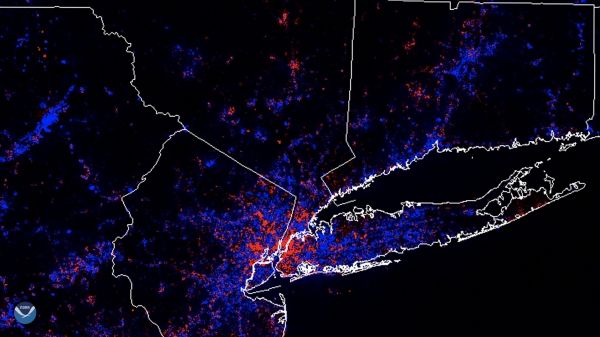 NOAA scientists and colleagues have created an image of the change in nighttime illumination over metropolitan New York City and surrounding regions since the COVID-19 slowdown.

Tapping into data from the NOAA/NASA Suomi NPP satellite’s Day/Night Band (DNB), NOAA’s Joint Polar Satellite System (JPSS) colleagues at the Cooperative Institute for Research in the Atmosphere (CIRA), Cooperative Institute for Meteorological Satellite Studies (CIMSS), and the Colorado School of Mines (CSM) examined the difference in illumination of urban and suburban lights between February 2020 and March 2020. By doing so, the scientists were able to detect areas of dimming (blue), and in some cases brightening (red), of nighttime lights from the Mid-Atlantic to New England.

During this time, there was a noticeable decrease in nighttime lights in several locations, including Staten Island, central Long Island, Upstate New York, eastern Pennsylvania, and much of Connecticut. Elsewhere, nighttime illumination increased in some spots, like Manhattan, Brooklyn, northeastern New Jersey, extreme eastern Long Island, and central Massachusetts.