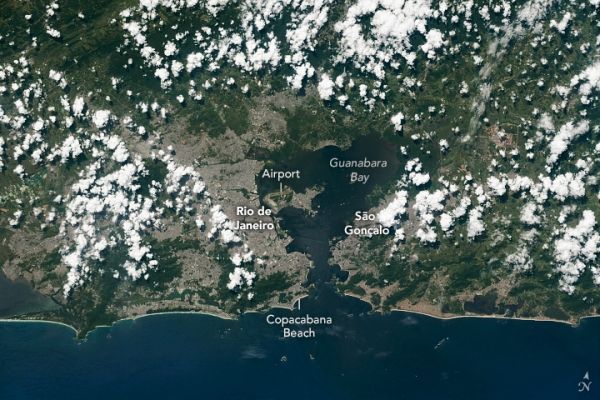 Clouds formed over rural areas and the cities but are noticeably absent above Guanabara Bay and the ocean due to the mechanisms of cloud formation.

Popcorn clouds dot the landscape over the Brazilian cities of Rio de Janeiro and São Gonçalo in this photograph taken by an astronaut looking down from the International Space Station (ISS). Rio de Janeiro is home to more than 6.5 million people.

Clouds had formed over rural areas and densely populated cities but are noticeably absent above Guanabara Bay, the coastal lagoons, and the ocean due to the mechanisms of cloud formation. Heat from the Sun warms the land surfaces in the area, which then warms the air directly above it. That warm air, and all of its cloud-making water vapor, then rises and condenses into clouds.