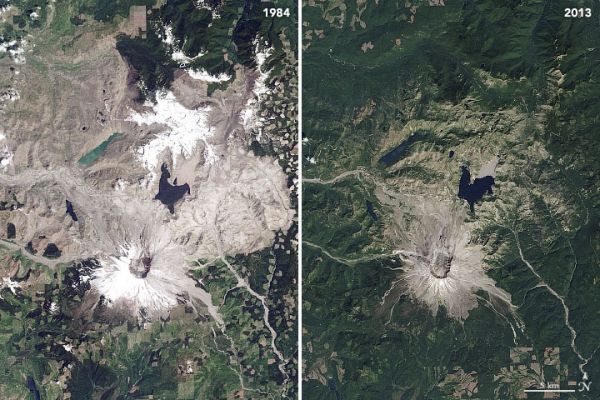 In May 1980, a satellite watched the mountain violently erupt; satellites over the next forty years watched it recover.

Forty years have passed since a tremendous blast at Mount St. Helens—the deadliest eruption in U.S. history—transformed the landscape for hundreds of square miles in the Pacific Northwest. Satellite images acquired in the days around the eruption on May 18, 1980, helped scientists understand the event; images acquired over the past four decades have given them insight into how a landscape recovers.

The image above, acquired with the Operational Land Imager (OLI) on Landsat 8, shows the volcano in southwest Washington on April 17, 2020. Seasonal snow still blanketed its flanks despite the spring sunshine. By August, most of the snow on the mountain will melt. The image is the most recent, cloud-free view of the mountain from Landsat 8, which acquires images of any given place on Earth about once every two weeks.