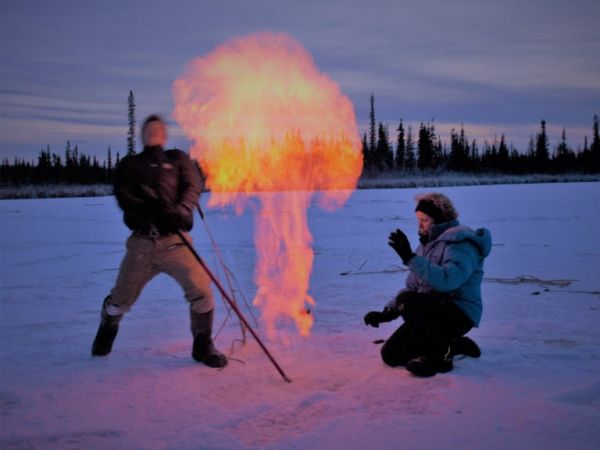 Methane - released from thawing permafrost beneath Alaskan lakes - freeze in the ice allowing researchers to measure and calculate how much methane is released.

Trudging through snow up to their thighs, researchers Nicholas Hasson and Phil Hanke pull 200 pounds of equipment through boreal terrain near Fairbanks, Alaska. Once they reach their destination – a frozen, collapsing lake — they drill through two feet of ice to access frigid water containing copious amounts of methane.

Hasson lies flat on his stomach and reaches both of his arms into the subzero water. The stench of 40,000-year-old rotting vegetation floats up from the permafrost. He attempts to open the valve on a piece of equipment underneath the water’s surface using his fingers, but his thick protective gloves (water would instantly freeze onto his arms, otherwise) make simple tasks challenging. Finally, he manages to collect his sample, close the valve, and put a stopper in the vial, which is now full of methane gas.

The researchers then trek back to their lab to analyze these samples as part of ongoing field research to fill in a key knowledge gap in climate science: What happens to thawing permafrost in winter?