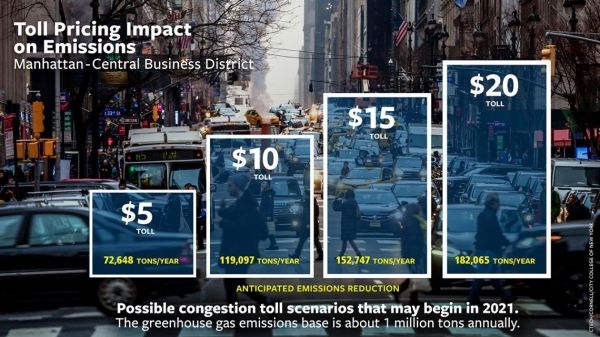 New York City is among the most congested traffic spots in the world.

New York City is among the most congested traffic spots in the world.

Soon, in an effort to ease some of the Big Apple’s legendary gridlock – and make the air more breathable – driving a car into midtown Manhattan will cost you.

New research by Cornell and the City College of New York (CCNY), which is part of the City University of New York system, shows that by enforcing a $20 toll for cars and taxis to enter the central business district of Manhattan, traffic congestion could be reduced by up to 40%, public transit ridership could grow by 6% and greenhouse gas emissions could be reduced by 15%.

“If we charge a high dollar amount of tolls, we can decrease the number of cars and taxis, shrink gridlock, bring down carbon dioxide emissions and reduce particulate matter,” said Oliver Gao, professor of engineering and director of Cornell’s Center for Transportation, Environment and Community Health. “This is good news for the environment and from a public health perspective.”