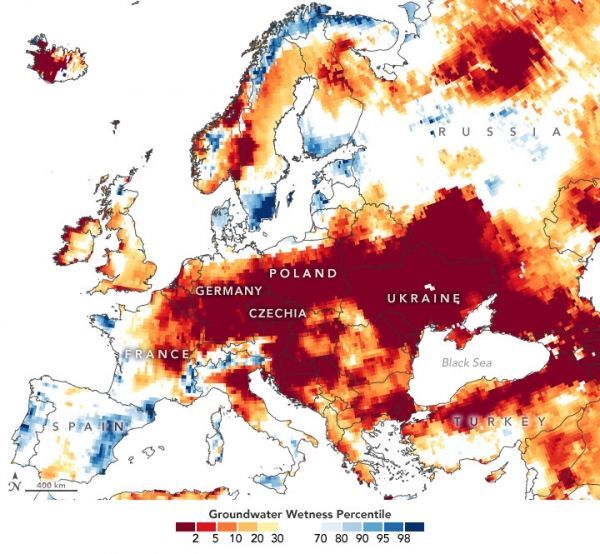 Long-term rainfall deficits, heat waves, and increased evaporation have depleted some of the groundwater supply beneath central and eastern Europe.

The 2019-20 winter in Europe was the warmest on record, with little snow. The spring was also drier and warmer than normal, with a historic heat wave in the middle of May. The forecast for summer 2020 is not looking much better. For the third year in a row, Europe is facing potential water woes.

According to the Copernicus Climate Change Service (C3S), meteorological drought conditions started in eastern Europe in early spring 2020 and migrated across the continent with drier-than-normal weather in April and May. Tributaries and main stems of some of the continent’s rivers—such as the Elbe, Warta, and Danube—fell below normal seasonal flow. In late May and June, surface soil moisture and waterways in some areas rebounded a bit after heavy rain showers. And all of this occurred as 2020 continued to be one of the hottest years on record globally.

In their seasonal review and forecast, C3S meteorologists predicted below-average precipitation for southern and eastern Europe in June, July, and August.