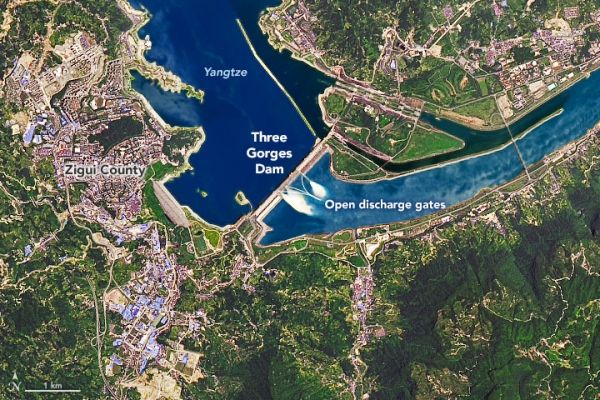 Since the start of Asia’s summer monsoon season on June 1, 2020, excessive rainfall has pushed lakes and rivers to record high levels in China. Flooding within the Yangtze River Basin, in particular, has displaced millions of people.

The Yangtze River is Asia’s longest, winding 6300 kilometers (3,900 miles) through China. Together with its network of tributaries and lakes, the river system has undergone significant development as a means to generate power, store water for drinking and irrigation, and control flooding. Today the watershed is dotted with tens of thousands of reservoirs, and its rivers are spanned by numerous dams.

During the 2020 summer monsoon, floodwater was being held, or “absorbed,” by 2,297 reservoirs in the region, including the one behind Three Gorges Dam. In an attempt to regulate the flow of floodwater, dam operators can discharge water through spillway gates.