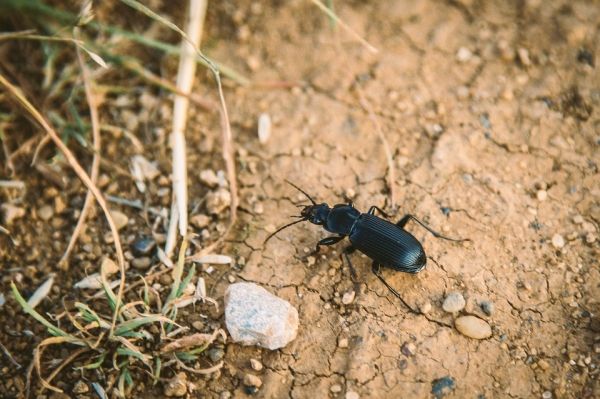 Nowadays, life in the soil must contend with several problems at once.

Nowadays, life in the soil must contend with several problems at once. The biomass of small animals that decompose plants in the soil and thus maintain its fertility is declining both as a result of climate change and over-intensive cultivation. To their surprise, however, scientists from the Helmholtz Centre for Environmental Research (UFZ) and the German Centre for Integrative Biodiversity Research (iDiv) Halle-Jena-Leipzig have discovered that this effect occurs in two different ways: while the changing climate reduces the body size of the organisms, cultivation reduces their frequency. Even by farming organically, it is not possible to counteract all negative consequences of climate change, the researchers warn in the trade journal eLife.

Largely unnoticed and in secret, an army of tiny service providers works below our feet. Countless small insects, arachnids and other soil dwellers are indefatigably busy decomposing dead plants and other organic material, and recycling the nutrients they contain. However, experts have long feared that these organisms, which are so important for soil fertility and the functioning of ecosystems, are increasingly coming under stress.

On the one hand, they are confronted with the consequences of climate change, which challenges them with high temperatures and unusual precipitation conditions with more frequent droughts. On the other hand, they also suffer from over-intensive land use. If, for example, a meadow is turned into a field, soil animals find fewer niches and food sources there. Intensive ploughing, mowing or grazing, as well as the use of pesticides and large amounts of fertilizer also have a negative effect. But what happens when soil life is faced with both challenges at the same time? "Until now, we knew almost nothing about this," says Dr Martin Schädler from the UFZ. But he and his colleagues at the UFZ and iDiv have very good opportunities to pursue such complex questions. The ecologist coordinates the "Global Change Experimental Facility" (GCEF) in Bad Lauchstädt near Halle. There, researchers can simulate the climate of the future on arable and grassland plots used with varying degrees of intensity. In large steel constructions reminiscent of greenhouses without a roof or walls, they recreate a scenario that could be typical for the region between 2070 and 2100: it is about 0.6 degrees warmer than today, in spring and autumn there is ten percent more precipitation and summers are about 20 percent drier. A team led by Martin Schädler and doctoral student Rui Yin has now investigated how these conditions affect mites and springtails. Both groups have many decomposers in their ranks, which play an important role in the nutrient cycles in the soil.