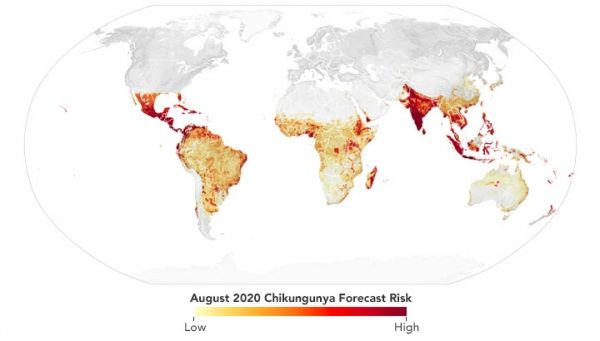 Researchers can predict potential outbreaks of the mosquito-borne virus months in advance by using satellite data.

In 1952, a new and unusual virus was reported in southern Tanzania on the Makonde Plateau. The viral illness caused sudden fever, rash, and joint pain that could last for months. Sometimes causing victims to hunch over due to the aches, the virus was called chikungunya—meaning “bent over in pain” in the local Makonde language. The virus is rarely fatal, but symptoms can last for a few days. It has no vaccine or antiviral treatment.

For the next 50 years, chikungunya was largely dormant, with only a few small outbreaks and sporadic cases. But then it made a large-scale resurgence. At first, it appeared along the Kenyan coast in 2004 in Lamu and then Mombasa. During 2005-2006, the virus spread to hundreds of thousands of people living on western Indian Ocean islands and in India. A decade later, chikungunya became national news with almost 900 reported cases in the U.S. in 2015.

As these chikungunya outbreaks were occurring, scientist Assaf Anyamba noticed an interesting trend: the mosquito-borne outbreaks were happening during drought conditions.