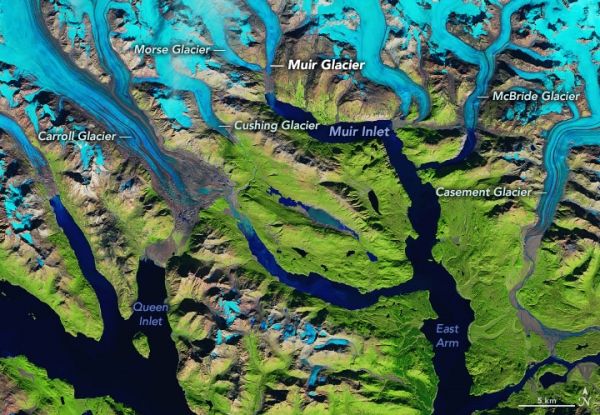 In 1750, around the time the Little Ice Age reached its maximum, Glacier Bay in southeast Alaska was entirely filled with ice. When Captain George Vancouver sailed there in 1795, the glacial ice had pulled back to expose five miles of the bay—all part of a tidewater glacier’s natural life cycle of advance and retreat. By the time naturalist John Muir explored and documented the region in 1879, the ice front had retreated 45 miles.

Today, the ice has retreated more than 60 miles (100 kilometers), and most vestiges of the original glacier now terminate on land. Just a handful of glaciers still flow into Glacier Bay and dispense icebergs—a type of glacier known as “tidewater glaciers.” Only one—McBride Glacier—still flows into the bay’s East Arm.

The past few decades of glacial retreat are visible in the images above, acquired on September 6, 1986, with Landsat 5, and September 17, 2019, with Landsat 8. Snow and ice are blue in these false-color images, which use different wavelengths to better differentiate areas of ice, rock, and vegetation. The images are centered on Glacier Bay’s East Arm, which extends north past McBride Glacier and northwest into Muir Inlet. (Part of the bay’s West Arm is visible at the bottom-left.)