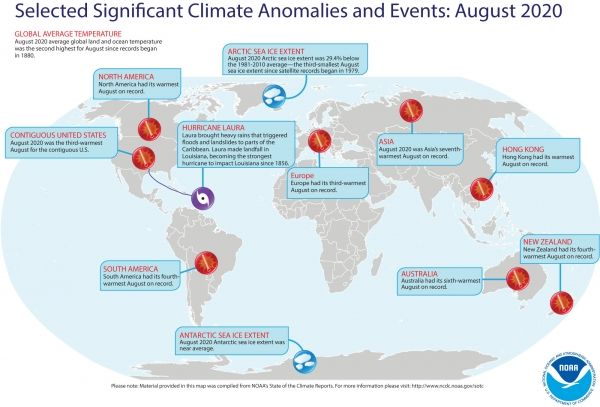 August 2020 ended as 2nd hottest for the globe

It’s been a remarkably steamy, record-setting last three months for Mother Earth. Not only was August 2020 the second-warmest August on record, but the Northern Hemisphere had its warmest summer, and the globe as a whole had its third-hottest three-month season, too. Here are highlights from NOAA’s latest monthly global climate report:

Climate by the numbers: August 2020
According to scientists at NOAA’s National Centers for Environmental Information, the average global land and ocean surface temperature in August was 1.69 degrees F (0.94 of a degree C) above the 20th-century average of 60.1 degrees F (15.6 degrees C), making it the second-hottest August in the 141-year record, behind August 2016.

The Northern Hemisphere had its hottest August on record with a temperature departure from average of 2.14 degrees F (1.19 degrees C), besting the previous record set in August 2016.