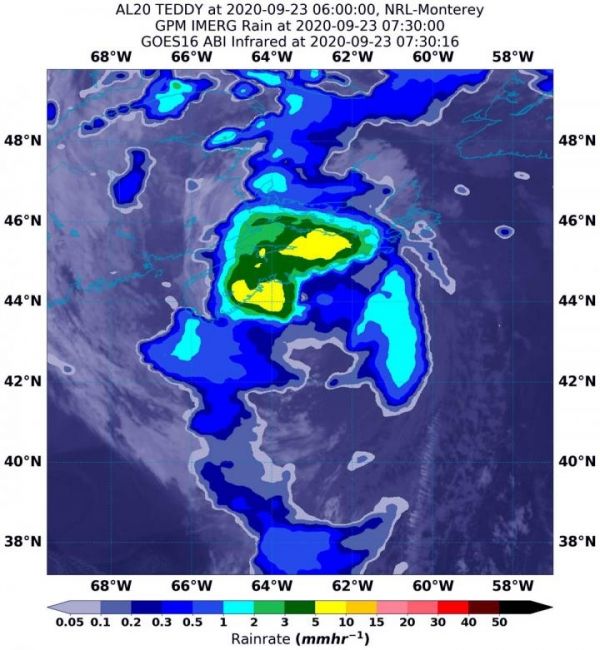 Hurricane Teddy has transitioned to a large post-tropical cyclone over eastern Canada.

Teddy made landfall in the Sheet Harbour area of Nova Scotia on the province’s Eastern Shore around 7:30 a.m. EDT, Sept. 23.

Warnings and Watches in Effect on Sept. 23

NOAA’s National Hurricane Center (NHC) issued warnings and watches for Teddy on Sept. 23. Tropical Storm Warning is in effect for the south coast of Nova Scotia from Digby to Meat Cove, and for Port aux Basques to Francois, Newfoundland, Canada.

Image: NASA's IMERG rainfall product estimated on Sept. 23 at 3:30 a.m. EDT (0730 UTC) that Teddy was generating between 5 and 15 mm (0.20 and 0.60 inches) of rain per hour around the center of circulation. Rainfall throughout most of the storm was estimated as falling at a rate between 0.3 and 2 mm (0.01 to 0.08 inches) per hour. The rainfall data was overlaid on infrared imagery from NOAA's GOES-16 satellite. (Credit: NASA/NOAA/NRL)