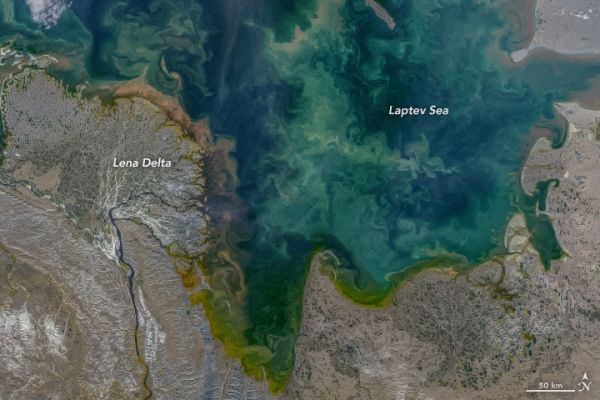 Months before Arctic sea ice reached its annual minimum extent for 2020, the floating blanket of ice had already pulled away from the Siberian coast. The seasonal ice will eventually return, but in mid-September, inland fresh water continued to flow unimpeded into the Laptev Sea.

The result is a colorful mixture of dissolved organic matter and sediments that help trace the water’s otherwise invisible currents and eddies. The Moderate Resolution Imaging Spectroradiometer (MODIS) on NASA’s Aqua satellite acquired this natural-color image on September 10, 2020.

Some of the brown and green color is the result of organic matter—debris from leaves, branches, and peat—dissolved in the river water and carried out to sea. The rivers also carry suspended sediments, adding to the colorful palette. The detailed patterns in the Laptev Sea are real, but certain shades and tones in the data have been separated and filtered to make the sediments and dissolved organic matter stand out.