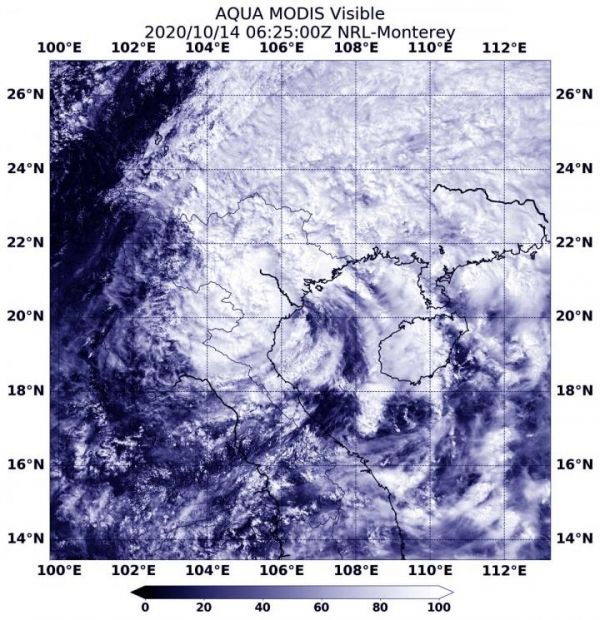 Tropical Storm Nangka made landfall south of Haiphong, Vietnam and began to weaken.

Tropical Storm Nangka made landfall south of Haiphong, Vietnam and began to weaken. NASA’s Aqua satellite revealed wind shear was affecting the storm as it continued to push inland.

The Moderate Resolution Imaging Spectroradiometer or MODIS instrument that flies aboard NASA’s Aqua satellite captured a visible image of Tropical Storm Nangka on Oct. 14, 2020 at 2:25 a.m. EDT (0625 UTC) that revealed after the storm made landfall it began weaken. In the imagery, strong storms continued to circle the center and were in the northern quadrant.

On Oct 14 at 5 a.m. EDT (0900 UTC), Nangka was centered near latitude 20.2 degrees north and longitude 106.1 degrees east, about 59 nautical miles southeast of Hanoi, Vietnam. Nangka tracked west-northwestward and further inland and was being affected by vertical wind shear.

In general, wind shear is a measure of how the speed and direction of winds change with altitude. Tropical cyclones are like rotating cylinders of winds. Each level needs to be stacked on top each other vertically in order for the storm to maintain strength or intensify. Wind shear occurs when winds at different levels of the atmosphere push against the rotating cylinder of winds, weakening the rotation by pushing it apart at different levels. Once a tropical cyclone makes landfall, the topography contributes to wind shear that weakens a storm’s circulation.