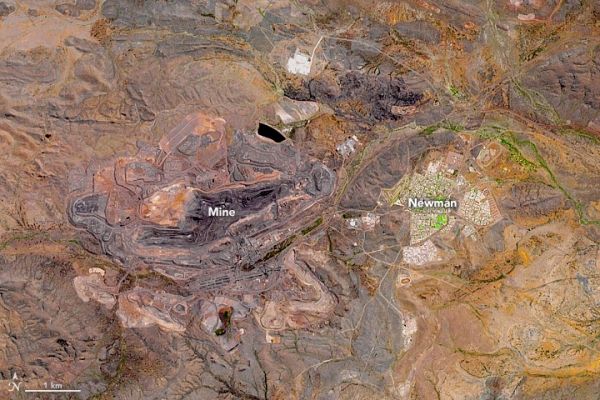 The site in Western Australia holds one of the country’s largest and oldest iron ore mines.

Australia is a top iron ore producer and exporter in the world, holding nearly 30 percent of the estimated global supply. The majority of those reserves are found in Western Australia, home to one of the country’s largest and oldest iron ore mines.

The image above shows the Mount Whaleback Iron Ore Mine, adjacent to the mining town of Newman. The image was acquired by the Advanced Spaceborne Thermal Emission and Reflection Radiometer (ASTER) on NASA’s Terra satellite on July 16, 2020. The image was composed from green, red, and near-infrared light, a combination that helps differentiate components of the landscape; water is black and vegetation is green.

The deposits at Mount Whaleback were discovered in 1957 by prospector Stan Hilditch. After World War II, Hilditch began exploring Western Australia for minerals. He concentrated their search in the hills because he believed the mountainous terrain would help the minerals precipitate. Searching in the Ophthalmia Range, he climbed up a hill and stumbled upon a massive iron ore deposit that soon became Mount Whaleback iron ore mine.