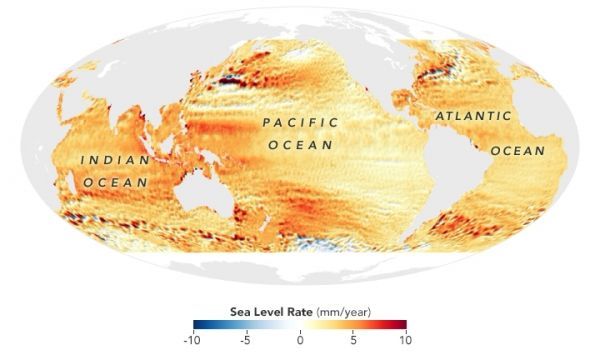 The ocean is lumpy and sloshes around its basins for natural reasons. But it is also rising, slowly and steadily.

From a ship, a plane, or the beach, the oceans can look pretty flat and uniform. But in reality, the water in the ocean piles up in peaks and valleys. It stands higher on some shores than on others. It can slosh around in ocean basins like the water in a bathtub. The surface of the ocean rises and falls naturally, varying as much as 2 to 3 meters (6 to 10 feet) in places.

Scientists also know that the overall level of the sea has been rising around the world, and more in some places than others. They estimate that over the past 140 years, global mean sea level has risen 21 to 24 centimeters (8 to 9 inches).

There are many reasons why the ocean surface is lumpy. The friction between winds and water causes waves to build up. The tug of gravity from the Moon and Sun causes tides to rise and fall. The rotation of Earth (Coriolis effects) and the flow of currents also amass water in vast streams. Atmospheric pressure pushes and pulls on the water surface. Continents, islands, and even underwater seamounts exert a gravitational tug that draws water up around them.