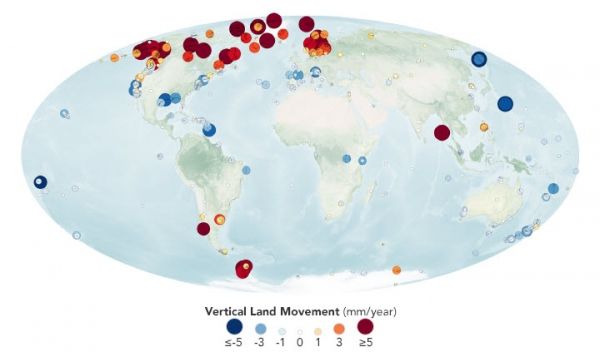 Earth’s surface may seem motionless most of the time, but an array of measurements show that natural and human-caused processes cause coastal land to rise and fall.

You may have heard that sea levels are rising because of the thermal expansion of warming ocean water and the addition of fresh water to the oceans from melting ice sheets and glaciers. That’s true. But there is another reason that sea levels in your local area could be rising (or even falling): the land also moves relative to the sea.

Scientists who study changes in Earth’s size and shape, or geodesists, have long measured vertical land motion with inexpensive ground-based tools. But in the Space Age, satellite-based techniques have revolutionized geodesy by making it possible to study Earth’s changing shape—including subsidence and uplift—on a global scale and in three dimensions.

A century ago, surveyors measured the height of land with spirit levels—part carpenter’s level and part telescope. For instance, the photograph below shows surveyors using a spirit level to measure elevation in Glen Canyon in 1921.