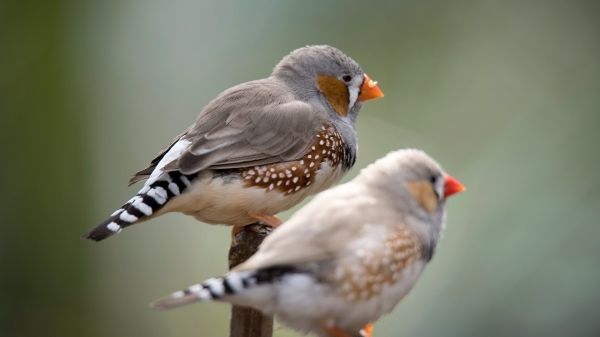 How exactly do birds “talk” to one another? And how can birdsong research help us understand communication in humans, too?

How exactly do birds “talk” to one another? And how can birdsong research help us understand communication in humans, too?

In a sequence of publications, psychology Professor Emeritus Robert Dooling and his team have demonstrated that for zebra finches, the subtle—and to human ears, inaudible—nuances in sound texture or timbre far outweigh the sequence of repeated sounds, which is deeply embedded in human communication.

While the quality and tone of birdsong play key roles in communication for other avian species as well, the team’s research over several years suggests new avenues of investigation in using zebra finches in particular as animal models for the processing of sounds and sequences.

Robert Dooling“Going back to Aristotle, people have talked about birdsong in terms of sequences, and in the 1800s before there was any kind of sound analysis equipment, musicians were even trying to use musical notation to capture what birdsong was,” Dooling said. “There was always the idea that as humans we were hearing it the way they were hearing it, but now we know they’re communicating something we cannot understand.”

Continue reading at University of Maryland.