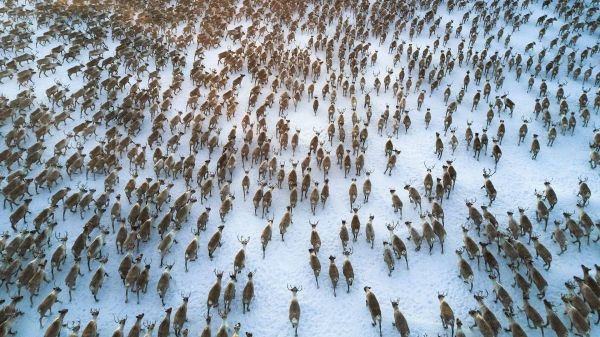 From when they give birth to the timing of their migrations, animals are responding in unexpected ways to changes in their environment.

From when they give birth to the timing of their migrations, animals are responding in unexpected ways to changes in their environment, an international team including University of Maryland biologists found using a new large-scale archive of animal movement studies.

The collection contains data from studies from 1991 to the present across the global Arctic and sub-Arctic, vast areas experiencing some of the most dramatic effects of global warming, including animal declines. The researchers used the archive to conduct three case studies that revealed surprising patterns and associations between climate change and the behavior of golden eagles, bears, caribou, moose and wolves.

This work, published today in the journal Science demonstrates both the feasibility and importance of studying animal ecology on extremely large scales.

“(T)his is an early example of what we might call global animal movement ecology,” said Elie Gurarie, an associate research scientist in UMD’s Department of Biology and a co-author of the paper. “We’re increasing our ability to monitor the pulse of animal populations across the Earth and ask big picture questions about what it means.”

Continue reading at University of Maryland.