Details
Kavli Institute for the Physics and Mathematics of the Universe 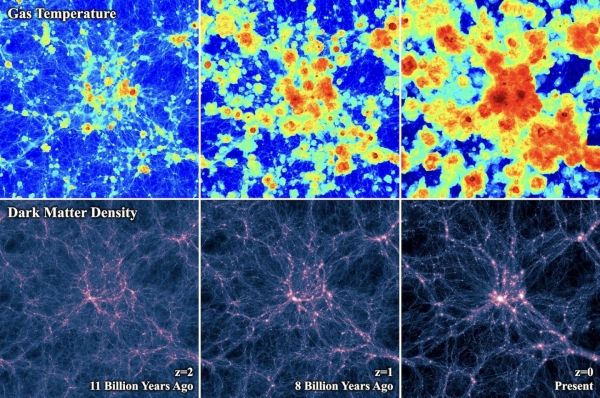 How hot is the Universe today? How hot was it before?

How hot is the Universe today? How hot was it before? A new study by an international team of researchers, including members of the Kavli Institute for the Physics and Mathematics of the Universe (Kavli IPMU), suggests that the mean temperature of gas in large structures of the Universe has increased about 3 times in the last 8 billion years, to reach about two million Kelvin today.

The large-scale structure of the Universe refers to the global pattern of how galaxies and galaxy clusters are distributed in space. This cosmic net formed from tiny irregularities in the matter distribution in the early Universe, which were amplified through gravitational attraction. “As the Universe evolves, gravity pulls dark matter and gas in space together into galaxies and clusters of galaxies,” said Yi-Kuan Chiang, the lead author of the study, and a research fellow at the Ohio State University Center for Cosmology and AstroParticle Physics. “The drag is violent—so violent that more and more gas is shocked and heated up.”

This heated gas can then be used to measure the mean temperature of the Universe over cosmic time. In particular, the researchers used the so-called “Sunyaev-Zeldovich” effect, named after Rashid Sunyaev, director emeritus at the Max Planck Institute for Astrophysics, and Soviet-era physicist Yakov Zeldovich, who first predicted this phenomenon theoretically. This effect arises when low-energy photons of the cosmic microwave background radiation are scattered by hot electrons in the large-scale structure of the Universe. The scattering transfers energy from electrons to photons, making the hot electron gas visible. The intensity of the Sunyaev-Zeldovich effect is proportional to the thermal pressure of the gas, which, in turn, is proportional to the temperature of electrons.

Image: Computer simulation of the evolution of the large-scale structure (bottom) and the temperature (top) of the Universe. The time flows from the left to the right panels, with the rightmost panel showing the present-day epoch. (Credit: D. Nelson / Illustris Collaboration)