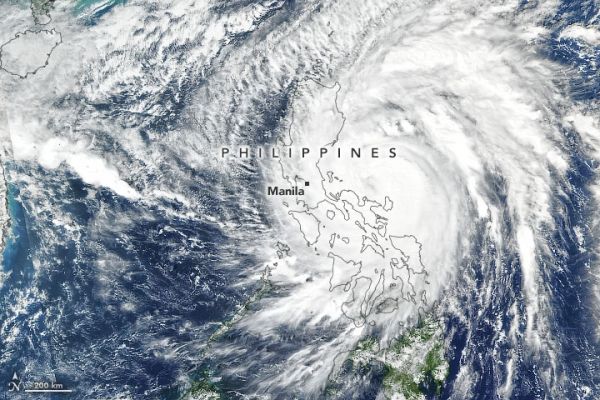 The typhoon brought strong winds and flooding to Manila.

On November 11, 2020, Typhoon Vamco thrashed the Philippines with sustained winds of 150 kilometers (90 miles) per hour—the equivalent of a category 2 hurricane. The typhoon (known as Ulysses in the Philippines) cut power to millions, caused more than 100,000 evacuations, and killed at least six people.

The image above shows the typhoon on November 11 at 1:05 p.m. Philippines Standard Time (05:05 Universal Time), a few hours before the typhoon made landfall. The image was acquired by the Visible Infrared Imaging Radiometer Suite (VIIRS) on the Suomi NPP satellite.

The storm first made landfall in Patnanungan, Quezon, around 10:30 p.m. and then continued west to hit the island of Luzon, where Manila saw its worst flooding in years.