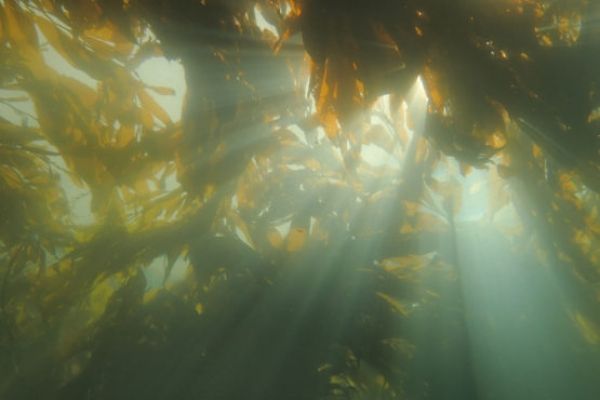 A new analysis of California’s Monterey Bay evaluates kelp’s potential to reduce ocean acidification, the harmful fallout from climate change on marine ecosystems and the food they produce for human populations.

Ethereal, swaying pillars of brown kelp along California’s coasts grow up through the water column, culminating in a dense surface canopy of thick fronds that provide homes and refuge for numerous marine creatures. There’s speculation that these giant algae may protect coastal ecosystems by helping alleviate acidification caused by too much atmospheric carbon being absorbed by the seas.

A new on-site, interdisciplinary analysis of giant kelp in Monterey Bay off the coast of California sought to further investigate kelp’s acidification mitigation potential. “We talk about kelp forests protecting the coastal environment from ocean acidification, but under what circumstances is that true and to what extent?” said study team member Heidi Hirsh, a PhD student at Stanford’s School of Earth, Energy & Environmental Sciences (Stanford Earth). “These kinds of questions are important to investigate before trying to implement this as an ocean acidification mitigation strategy.”

The team’s findings, published on Oct. 22 in the journal JGR Oceans, show that near the ocean’s surface, the water’s pH was slightly higher, or less acidic, suggesting the kelp canopy does reduce acidity. However, those effects did not extend to the ocean floor, where sensitive cold-water corals, urchins and shellfish dwell and the most acidification has occurred.