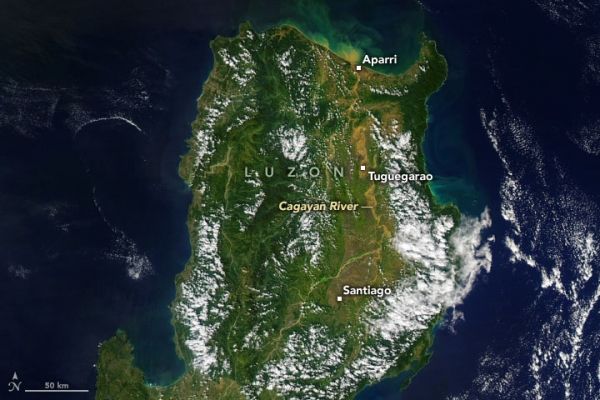 In the wake of three typhoons within a month, the Philippines provinces of Cagayan and Isabela have seen some of their worst flooding in decades.

In the days after Typhoon Vamco (Ulysses) passed through, the Philippines provinces of Cagayan and Isabela saw devastating flooding and landslides. Officials in Tuguegarao City, the provincial capital of Cagayan, called the flooding the worst they had endured in at least four decades.

According to UN Office for the Coordination of Humanitarian Affairs, more than 3.6 million people have been affected by the floods, with nearly 280,000 displaced and at least 73 deaths. Though flood waters are now receding, more than 67,000 homes have been damaged or destroyed, and power and communications are still cut off in many areas.

In the early afternoon on November 18, 2020, the Moderate Resolution Imaging Spectroradiometer (MODIS) on NASA’s Aqua satellite acquired this natural-color image of the northern portion of Luzon Island. The swollen and muddy Cagayan River stands out against the inland landscape and pours sediment into the Philippine Sea near Aparri. Because of its tropical climate, it is often difficult to get visible imagery of the island.