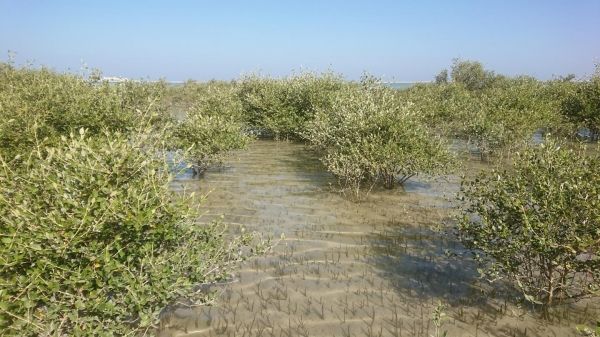 Most of the mangrove forests on the coasts of Oman disappeared about 6,000 years ago. Until now, the reason for this was not entirely clear.

Most of the mangrove forests on the coasts of Oman disappeared about 6,000 years ago. Until now, the reason for this was not entirely clear. A current study of the University of Bonn now sheds light on this: It indicates that the collapse of coastal ecosystems was caused by climatic changes. In contrast, falling sea level or overuse by humans are not likely to be the reasons. The speed of the mangrove extinction was dramatic: Many of the stocks were irreversibly lost within a few decades. The results are published in the journal Quaternary Research.

Mangroves are trees that occupy a very special ecological niche: They grow in the so-called tidal range, meaning coastal areas that are under water at high tide and dry at low tide. Mangroves like a warm climate; most species do not tolerate sea surface temperatures below 24 °C (75°F). They are tolerant to salt, but only up to a tolerance limit that varies from species to species. "This is why we find them nowadays mostly in regions where enough rain falls to reduce salinization of the soil," explains Valeska Decker of the Institute for Geosciences at the University of Bonn, the lead author of the study.

Fossil finds prove that there used to be many mangrove lagoons on the coast of Oman. However, some 6,000 years ago these suddenly largely vanished - the reasons for this were previously disputed. Over the past few years, Decker traveled several times to the easternmost country of the Arabian Peninsula to pursue this question for her doctoral thesis. With the support of her doctoral supervisor Prof. Gösta Hoffmann, she compiled numerous geochemical, sedimentological and archaeological findings into an overall picture. "From our point of view, everything suggests that the collapse of these ecosystems has climatic reasons," she says.

Read more at: University of Bonn

6,000 years ago, mangroves were widespread in Oman. Today, only one particularly robust mangrove species remains there, and this is found in just a few locations. (Photo Credit: © Valeska Decker/University of Bonn)