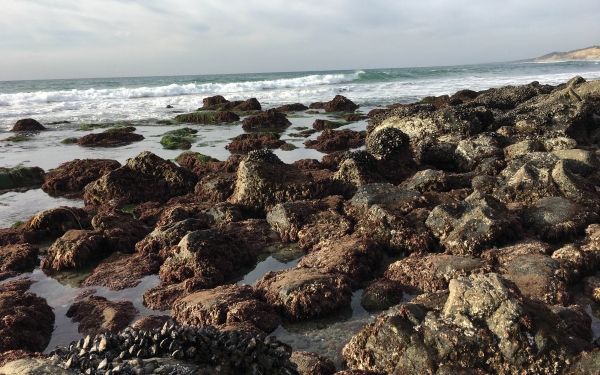 The large mollusk known as the California mussel makes its home in the rocky shoreline along the Pacific Coast from Mexico to Alaska. Considered a “foundational” animal, Mytilus californianus provides homes for hundreds of other species and offers a rich food source for species ranging from spiny lobsters to humans.

As the waters off our coasts change due to human influences, scientists at the University of California San Diego are finding that the composition of California mussel shells is weakening as it becomes more tolerant of acidic conditions.

Scientists have known that rising levels of human-produced carbon dioxide that are increasingly absorbed into the world’s oceans will have an impact on sea life. But as ocean waters increasingly acidify, tracking impacts on specific species has been difficult to gauge over time. Most of what we know about species’ responses to acidifying waters comes from short-term experiments that suggest these increases in ocean acidity—causing a lowering of seawater pH and less availability of carbonate ions to make shells—can lead to less fortified shells and more vulnerable animals.