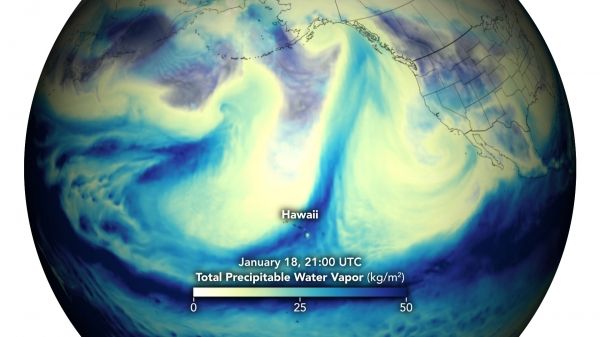 In mid-January 2021, the Pacific Northwest of North America was soaked by several episodes of heavy rainfall, leading to widespread flooding and landslides.

The culprit was a phenomenon known as an atmospheric river. And this event was about as extreme as they get.

Atmospheric rivers are long, narrow bands of moisture that move like a river in the sky, carrying water vapor from the equator toward the poles. The events occur around the world, usually during the autumn and winter. The U.S. West Coast is most often affected by rivers of warm, moist air originating around Hawaii.

The animation above shows the signature of atmospheric rivers, including a particularly potent event that doused parts of Washington, Oregon, and Northern California. Specifically, it shows the total precipitable water vapor—a measurement of the amount of water in a column of the atmosphere if all the water vapor in that column were condensed into liquid. The animation was derived from a NASA product known as the Goddard Earth Observing System Data Assimilation System (GEOS DAS), which uses satellite data and mathematical representations of physical processes to calculate what is happening in the atmosphere.