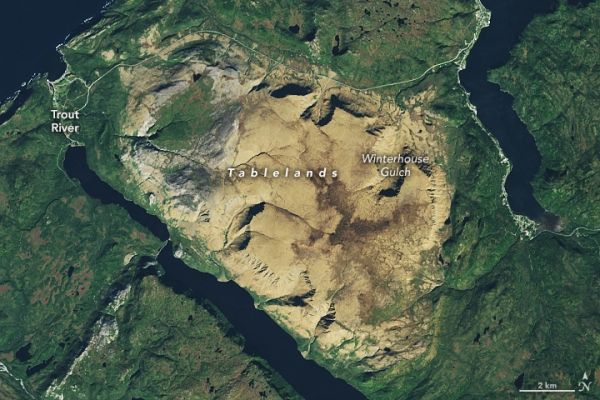 A geologist’s dream, Gros Morne National Park is one of the few places where you can set foot on the Earth's mantle without digging an inch.

Beneath Earth’s crust lies 2,900 kilometers (1,800 miles) of viscous mineral and rock known as the mantle. Famous and fanciful literature aside, no human is likely to visit the mantle or deep interior of Earth. But at Gros Morne National Park, people can step on fragments of the mantle without having to dig an inch.

On October 3, 2017, the Operational Land Imager (OLI) on Landsat 8 acquired natural-color imagery of Gros Morne National Park. The UNESCO World Heritage site covers 1,800 square kilometers (690 square miles) in the Great Northern Peninsula of western Newfoundland. A detailed view of the Tablelands, in the southern portion of the park, is below.

Gros Morne provides some of the world’s best exhibits of the process of plate tectonics. The park contains a portion of the Long Range Mountains, a subrange of the Canadian Appalachians that dates back to around 1.2 billion years ago, when present-day North America collided with another continent. Those mountains have since eroded and left behind the gneiss and granite peaks of the Long Range. The park contains some of the tallest peaks of the Long Range mountains, including Big Level and Gros Morne Mountain (French for “great somber”).