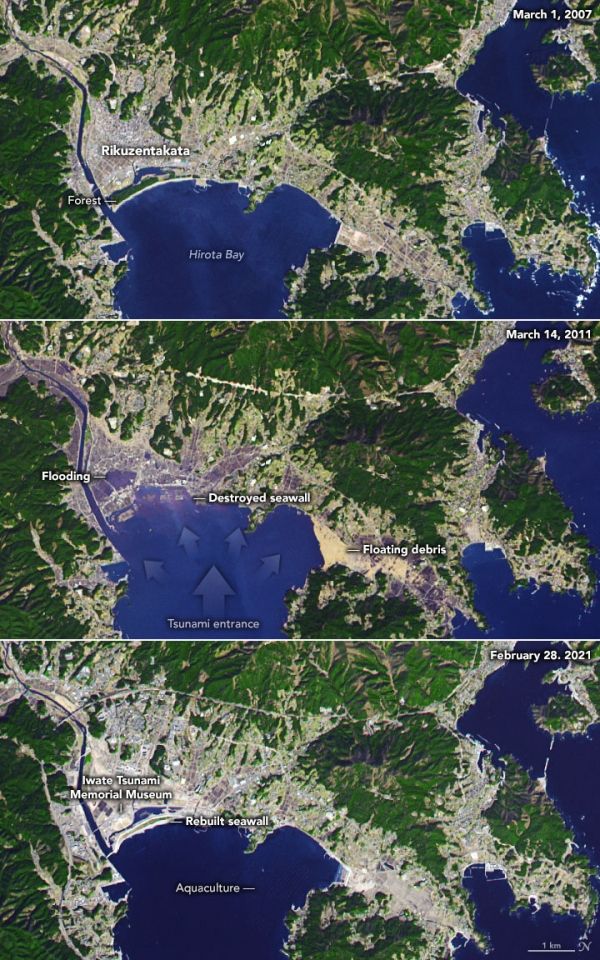 One of the hardest hit coastal cities in Japan is still working to recover.

On March 11, 2011, a magnitude 9.1 earthquake jolted the seafloor about 70 kilometers (45 miles) offshore of Japan’s Tohoku region. It was the largest quake recorded in Japan and the fourth largest in the world since seismic recording began around 1900.

Within an hour, tremendous tsunami waves inundated much of the eastern Japanese coast, sending 5- to 10-meter walls of water into coastal towns and cities. In Miyako, Iwate Prefecture, the runup height from the tsunami—the maximum elevation that water moved upland from the shore—reached 40.5 meters (133 feet) above sea level. Near Sendai, flood waters penetrated 10 kilometers (6 miles) inland.

According to the U.S. Geological Survey, the earthquake moved Japan’s main island of Honshu eastward by 2.4 meters (8 feet) and dropped about 400 kilometers (250 miles) of coastline by 0.6 meters (2 feet). The tsunami affected a 2000-kilometer stretch of coast and inundated more than 400 square kilometers of land in Iwate, Miyagi, and Fukushima prefectures.