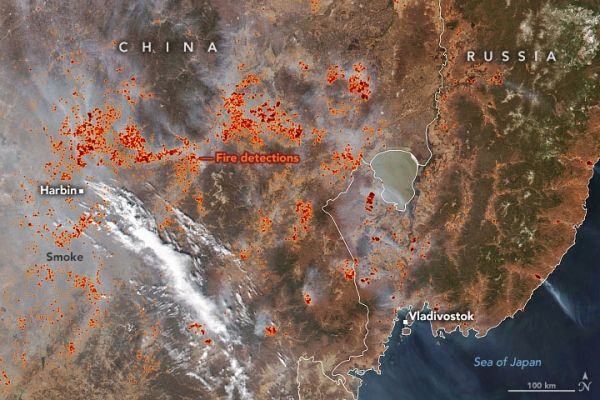 Many farmers in northeastern China and eastern Russia use fire to clear fields and get them ready for planting.

With millions of hectares of corn, rice, and beans sown in Heilongjiang each year, the province in northeastern China is one of the country’s most important food-producing areas. For many Heilongjiang farmers, one of the first steps in raising this year’s crop involves burning off the remaining bits of last year’s plants to remove debris from the fields and get them ready for planting in May.

This practice sometimes leads to hazy, smoke-filled skies, as shown by this natural-color satellite image from the Visible Infrared Imaging Radiometer Suite (VIIRS) on the NOAA-NASA Suomi NPP satellite. Throughout the spring, VIIRS has detected large numbers of “hotspots” associated with fires. These hotspots appear red and orange in the image above.

VIIRS began detecting sporadic fire activity in the region in mid-March 2021, as soon as warmer weather melted the snow cover. The number of fire detections then ballooned in mid-April, particularly around Harbin, as the spring burning season reached its peak.