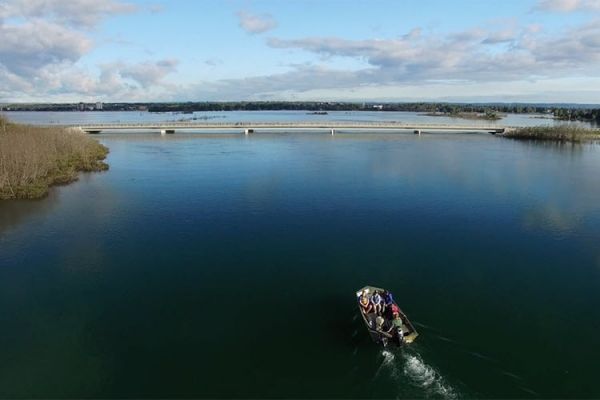 More juvenile fish have been using the rapids restored by NOAA and partners on the St. Marys River, according to a recent study.

In 2016, NOAA and partners completed a project to restore fast-flowing rapids on the St. Marys River in Michigan’s Upper Peninsula. The work has helped increase the number of juvenile fish in the area, according to a recent study published in the journal Restoration Ecology.

Over the past century, the St. Marys River has lost more than half of its historical rapids due to hydropower generation and navigational alterations. Important Great Lakes species like lake sturgeon and whitefish rely on rapids for spawning habitat. Restoring these lost rapids was determined to be a critical step in removing the river from the list of Great Lakes Areas of Concern.

In 2016, NOAA, the Great Lakes Commission, and a diverse group of partners worked to restore Little Rapids. Little Rapids was one of five rapids areas in the river that had been lost. A new multi-span bridge was installed, restoring natural water flow to roughly 70 acres of habitat used by fish and other aquatic organisms that rely on rapids. The bridge also features a walkway protected from road traffic that allows for safe and easy access for fishing.