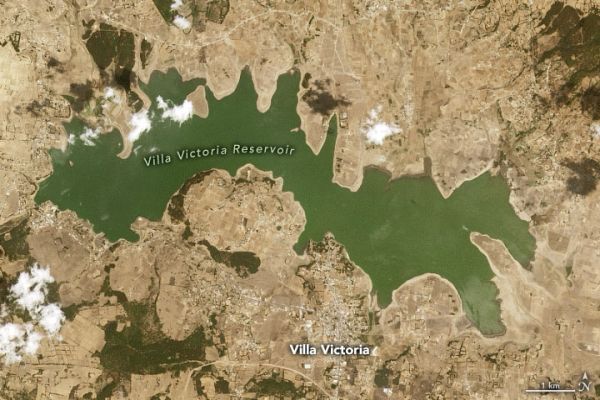 Nearly 85 percent of Mexico is experiencing drought, and water sources are dwindling.

Mexico is experiencing one of its most widespread and intense droughts in decades. Nearly 85 percent of the country is facing drought conditions as of April 15, 2021. Large reservoirs across the country are standing at exceptionally low levels, straining water resources for drinking, farming, and irrigation. The mayor of Mexico City called it the worst drought in 30 years for the city, which is home to about 9 million people.

The images above, acquired by the Operational Land Imager (OLI) on Landsat 8, show one of the major water supplies to Mexico City, the Villa Victoria reservoir. The right image shows the reservoir on March 30, 2021, the best recent cloud-free Landsat overpass. The left image shows more typical levels on March 27, 2020. More recent imagery, although cloudier, shows water levels have continued to decline. Villa Victoria is filled to about one third of its normal capacity.

Roughly sixty other large reservoirs, mostly in northern and central Mexico, are below 25 percent capacity. Due to the low supply, government managers have reduced water flow from the reservoirs. Some residents have been left without running water.