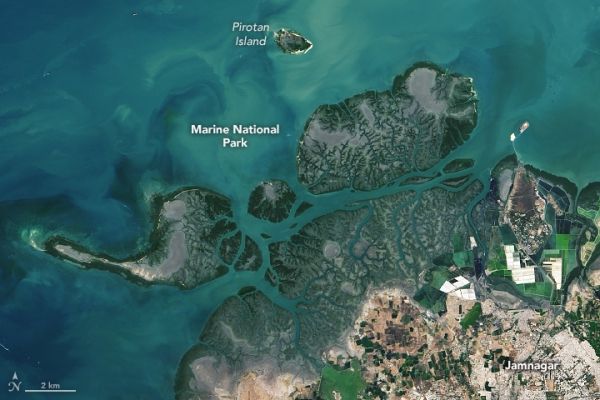 The Gulf of Kutch is home to India’s first national marine reserve.

Of more than 100 national parks in India, only about six are marine parks. The first was the Marine National Park and Sanctuary located in the Gulf of Kutch on the western shore. Not only does the reserve draw in tourists, but it also contains some of the most northerly coral reefs in the world as well as diverse marine life.

The image above shows the Gulf of Kutch and part of the Indian state of Gujarat on March 11, 2021, as acquired by the Moderate Resolution Imaging Spectroradiometer (MODIS) on NASA’s Terra satellite. The Marine National Park and Sanctuary is located on the southern shoreline of the gulf, along the Jamnagar coast.

Established in 1980, the marine sanctuary spans about 450 square kilometers (170 square miles) spanning from the mouth of the gulf near Okha towards the head near Jodiya. In 1982, a core area within the sanctuary was declared a national park. The reserve primarily protects two major ecosystems: corals and mangroves.