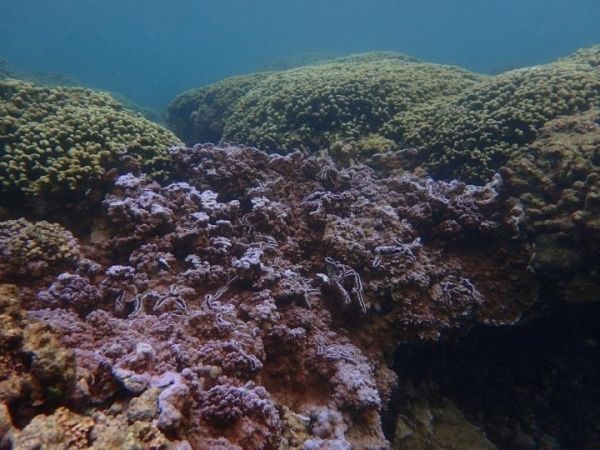 Smithsonian Conservation Biology Institute scientists are one step closer to understanding why some corals can weather climate change better than others, and the secret could be in a specific protein that produces a natural sunscreen.

Smithsonian Conservation Biology Institute scientists are one step closer to understanding why some corals can weather climate change better than others, and the secret could be in a specific protein that produces a natural sunscreen. As their name implies, Hawaiian blue rice corals sport a deep blue pigment, which is created by chromoprotein and filters out harmful ultraviolet (UV) radiation from the sun. Although UV damage may produce long-term impacts to reproduction in many coral species—including brown rice coral—it may not have the same effect on blue rice coral. The findings of this study were published June 7 in the paper “Reproductive plasticity of Hawaiian Montipora corals following thermal stress” in Scientific Reports.

“Having witnessed firsthand the devastating effects bleaching had on brown rice coral in 2014 and 2015, it is encouraging to see blue rice coral either recovered quickly after bleaching or was not affected by elevated ocean temperatures at all,” said Mike Henley, Smithsonian Conservation Biology Institute scientist and the paper’s lead author. “By studying blue rice corals’ reproductive successes, we can better understand how other corals weather climate change and ocean warming.”

A coral’s color is derived from a microscopic protozoa called zooxanthellae. This algae lives inside the coral tissue and serves as the main food source for shallow, reef-building corals, including brown rice coral and blue rice coral. They have a symbiotic relationship; the coral protects the zooxanthellae, and in turn zooxanthellae provide the coral with food. These algae also produce sunscreen for the coral. Corals are animals and cannot photosynthesize, but zooxanthellae can. The waste product of their photosynthesis are sugars that feed the coral.

A recent study by Smithsonian Conservation Biology Institute scientists found that the blue-hued chromoproteins in Hawaiian blue rice coral (foreground) may make it more resilient to UV rays and climate change than corals that are brown in color (background). (Photo Credit: Mike Henley/Smithsonian)