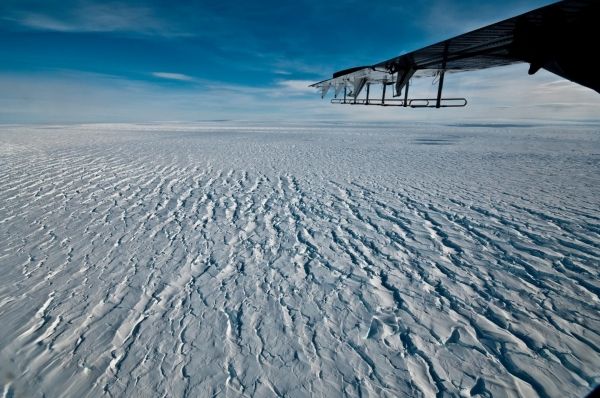 For decades, the ice shelf helping to hold back one of the fastest-moving glaciers in Antarctica has gradually thinned.

For decades, the ice shelf helping to hold back one of the fastest-moving glaciers in Antarctica has gradually thinned. Analysis of satellite images reveals a more dramatic process in recent years: From 2017 to 2020, large icebergs at the ice shelf’s edge broke off, and the glacier sped up.

Since floating ice shelves help to hold back the larger grounded mass of the glacier, the recent speedup due to the weakening edge could shorten the timeline for Pine Island Glacier’s eventual collapse into the sea. The study from researchers at the University of Washington and British Antarctic Survey was published June 11 in the open-access journal Science Advances.

“We may not have the luxury of waiting for slow changes on Pine Island; things could actually go much quicker than expected,” said lead author Ian Joughin, a glaciologist at the UW Applied Physics Laboratory. “The processes we’d been studying in this region were leading to an irreversible collapse, but at a fairly measured pace. Things could be much more abrupt if we lose the rest of that ice shelf.”

Pine Island Glacier ends in an ice shelf that floats in the Amundsen Sea. These crevasses are near the grounding line, where the glacier makes contact with the Antarctic continent. The photo was taken in January 2010 from the east side of the glacier, looking westward. This ice shelf lost one-fifth of its area from 2017 to 2020, causing the inland glacier to speed up by 12%. (Photo Credit: Ian Joughin/University of Washington)