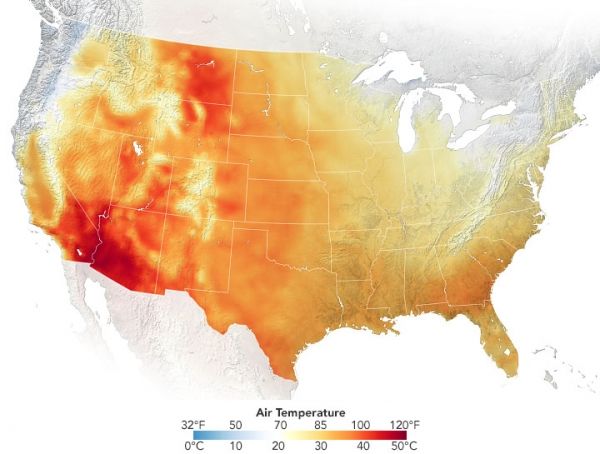 Extreme heat has descended on the southwestern United States, with several states enduring temperatures near and above record highs for June.

Extreme heat has descended on the southwestern United States this week, with several states enduring temperatures near and above record highs for June. As temperatures have surged, the region is also dealing with drought and scattered wildfires.

The map above shows air temperatures across the continental U.S. during the afternoon on June 15, 2021. The map was derived from the Goddard Earth Observing System (GEOS) model and depicts air temperatures at 2 meters (about 6.5 feet) above the ground. The darkest red areas are where the model shows temperatures around 49°C (120°F).

The GEOS model, like all weather and climate models, uses mathematical equations that represent physical processes (such as precipitation and cloud processes) to calculate what the atmosphere will do. Actual measurements of physical properties, like temperature, moisture, and winds, are routinely folded into the model to keep the simulation as close to observed reality as possible.