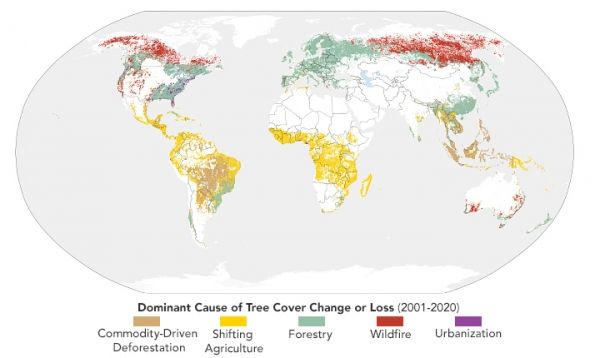 Using satellite data from the past two decades, scientists are starting to pinpoint which crops and farming styles have lasting impacts on forests.

Every year, scientists at the University of Maryland publish new data about the state of Earth’s forests based on observations from Landsat satellites. As has often been the case in recent years, the update for 2020 painted a bleak picture. In that one year, Earth lost nearly 26 million hectares of tree cover—an area larger than the United Kingdom.

The raw numbers can tell us how much and where forests were lost, but they do not explain what was driving those losses. How much deforestation was due to wildfires? Food production? Forestry management? An ongoing effort by researchers from The Sustainability Consortium and the World Resources Institute (WRI) attempts to answer such questions with maps and datasets that categorize and quantify the major drivers of annual forest losses. In doing so, the researchers have put a spotlight on the impact that food production has on forests, particularly in the tropics.

In 2020, for instance, Earth lost about 4.2 million hectares (16,000 square miles) of humid tropical primary forest—an area about the size of the Netherlands. Nearly half of that, their analysis shows, was due to food production, and half of that was due to commodity crops. In recent years, commodity crop production has pushed rates of forest loss to record levels.